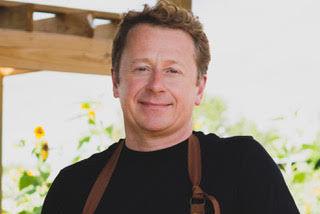 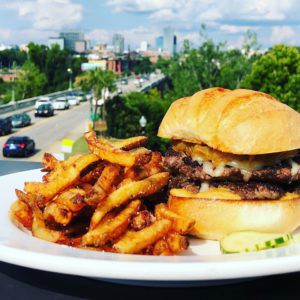 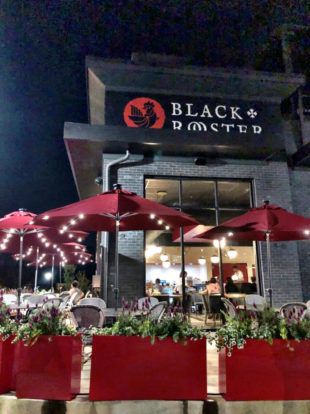 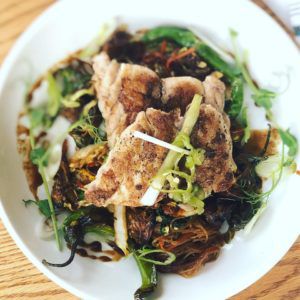 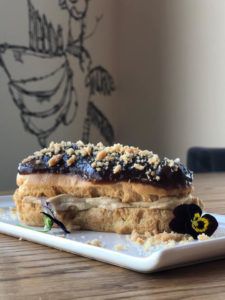 Black Rooster was opened in August by premier Chef Kristian Niemi. The French bistro-themed establishment is a part of West Columbia’s Brookland complex. Reviews of the food have been outstanding. Large crowds are also drawn to Black Rooster’s rooftop bar that offers a magnificent view of the Columbia skyline.

As the holiday season approaches, Niemi has agreed to share his culinary expertise as it applies to Thanksgiving dinner and cooking your bird.

Get the right size bird – “The perfect size turkey should be between 10-and-14 pounds,” said Niemi. “Anything bigger and you begin to risk drying out the breast before the rest of turkey is done. Figure on a pound of bird per person, or more if you want ample leftovers. I usually cook at least two birds, one the night before, for leftovers, and one on Thanksgiving for the meal.”

What type of bird is best?

“There is no huge difference between frozen and fresh turkeys,” said Niemi. “You can howl all you want about this one, but trust me, I’ve cooked both, side by side, and there is no difference.”

“According to one of my suppliers, said Niemi, “today’s freezing technology allows them to freeze the bird so fast that large, damaging ice crystals don’t have a chance to form. If you do use a frozen bird, start thawing your bird (early.) Don’t wait until Wednesday to start thawing it or you won’t have time.”

“Heritage birds are great, but very different,” said Niemi. “They have a stronger, richer taste and definitely need to be brined, as they usually come ‘fresh.’ Also you need to increase the number of birds you roast, as they are decidedly smaller.”

To brine or not to brine?

You may ask Why?

“Brining adds flavor to the entire bird,” Niemi said, “unlike seasoning the outside, which does almost nothing.”

He said to brine non-basted turkeys, which is usually what he uses.

“There is a big difference between natural birds and ‘basted’ birds. You must brine natural birds” said Niemi. “Basted birds will say something like “contains a 5% solution of salted broth, yadda, yadda, yadda. You can brine these, but you’ll need to make sure your brine has more flavoring agents like garlic, herbs, etc, and less salt or you’ll risk it being too salty.”

How to brine “You will need,” said Niemi, “a large cooler, four bags of ice or those frozen things you keep in your freezer, a couple of small, hole-free plastic bags. I use 13 gallon garbage bags, two cups of Kosher salt, two cups of sugar, a whole garlic clove, crushed, 1 TB of dried Thyme, 1 TB Peppercorns and two gallons of water. First, wash your completely thawed turkey in the sink.”

What to do next

“Place it in the doubled up garbage bags. Set the bird in the cooler on top of some ice. Dissolve the salt and sugar in hot water (about a quart or two), add the other stuff and pour the mixture into the bag. Top off with cold water. Allow the turkey to brine for around 8 hours, keeping it cold (around 36-40 degrees) the entire time,” said Niemi.

“I usually do this on Wednesday afternoon,” said Niemi, “and take it out of the brine before I go to bed. Remove the turkey and dry it with paper towels. At this point, I like to set it on a rack and let it air dry in the fridge for another eight hours. This seems to aid in the browning and crisping of the skin.”

“However, if you are short of fridge space, put some more ice in the bottom of your cooler and set the turkey in a pan on top of it. This will keep it cold enough.”

“Alright, the big day is here and you need to roast the turkey”

“Here’s what I do and it seems to work very well,” said Niemi. “It’s a bit cumbersome, but the results are well worth it and it’s very fast. Around two to two and a half hours for a fully cooked, juicy, golden brown gem of a gobbler.”

“First, he said, “get a V-rack and a shallow roasting pan. I double up two of the disposable foil ones with the handles that you buy at the grocery store. That way, I can just chuck them into the recycling bin afterwards. Preheat the oven to 400 degrees. Next, I like to melt a couple sticks of unsalted butter with some garlic and thyme (or herb mix like Herbes de Provence or Italian Seasoning). I like to slip some of this mixture under the skin of the bird and then I baste the bird with the rest. Next liberally sprinkle a mixture of Kosher salt and freshly ground pepper all over the bird. I have stopped stuffing my turkeys due to inconsistent cooking and instead.”

What to put in the turkey?

“I slip a handful of chopped carrots, onions, celery and thyme into the cavity to help flavor the bird while it cooks,” said Niemi. “I also put some veggies tossed in canola oil in the bottom of the pan and add some water to them. They, combined with the eventual drippings, will make a flavorful addition to our gravy. (Note: I kind of lied…I actually DO put a bit of stuffing in the bird, but only enough for me…about a cup or so…don’t tell my family.”

“Also, pull that stupid plastic pop-out thing out of the breast of your bird. I know,” said Niemi, “I’ll probably get a flaming bag of giblets left on my doorstep by the manufacturer of those ridiculous things, but they malfunction like crazy. I’ve seen lots of people overcook their birds because “the little thing hasn’t popped out”. Spend two bucks on a probe thermometer. It’s worth it even if you only use it once a year.”

Should you flip the bird?

“Now, the cumbersome part,” said Niemi. “Put your oven rack on its lowest setting. Place the turkey, breast down, on the v-rack in the roasting pan and place in the oven. Roast it for around 20-30 minutes, then remove it from the oven. Flip the bird to breast-side up, baste and return to the oven for 15-20 minutes at 400.”

Niemie said: “Add more water to the roasting pan each time if the pan is getting dry. After 15-20 minutes, drop the temp to 350 and roast until you get a thermometer reading of 155 in the breast and 160 in the thigh. If the breast begins to brown too deeply, simply tent it with foil.”

“Temperature rises after you take it out of the oven”

“Remember that the temperature of your bird will continue to rise well after its been removed from the oven,” said Niemi. “Remove the turkey and let it rest for 15-25 minutes, tented with foil, before you carve. This allows the juices to redistribute throughout the turkey and allows excess (yes, I said excess) juices to flow into the pan for gravy.”

“I’ve cooked a lot of birds over the years and this method, though cumbersome, seems to work the best. Remember, though, this only takes about 2-2 ½ hours, so adjust your timetable accordingly.”