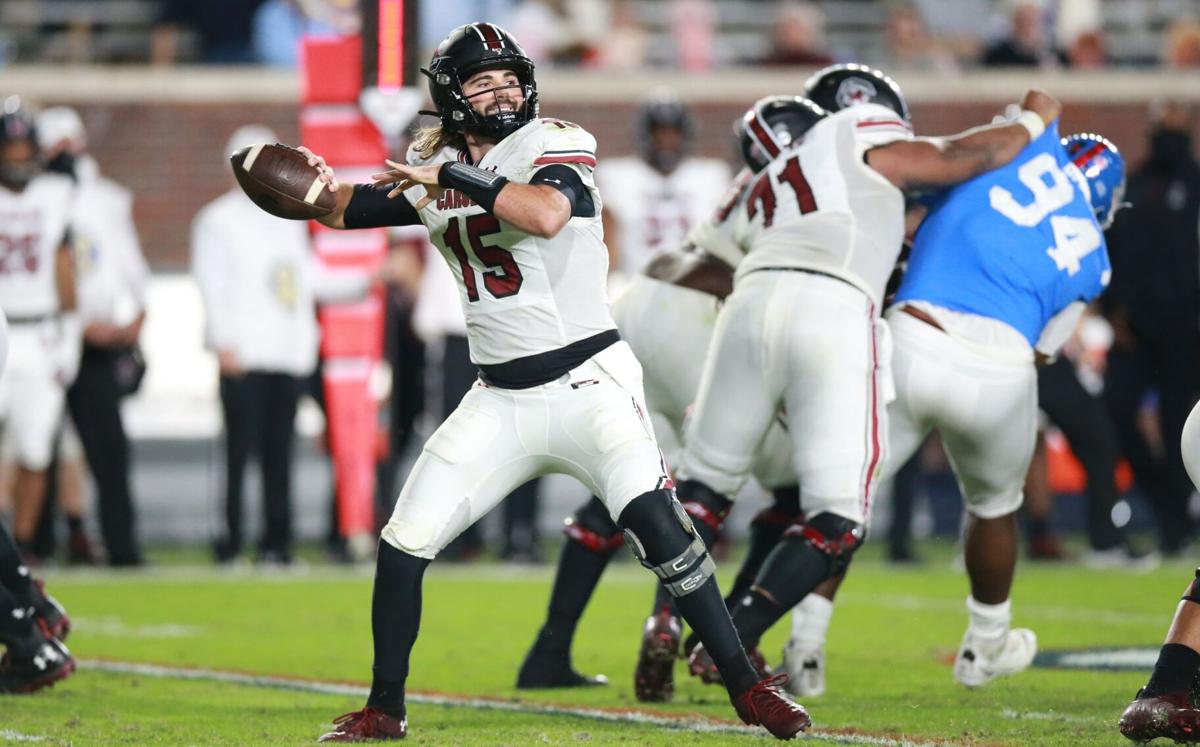 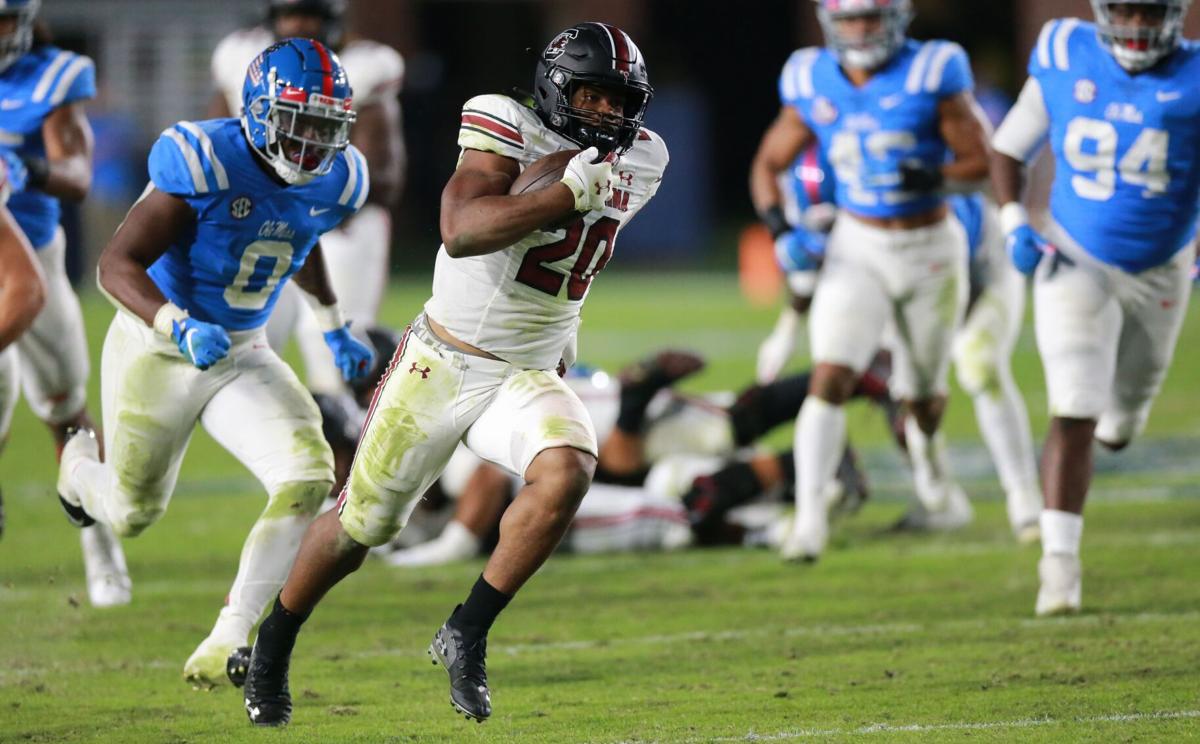 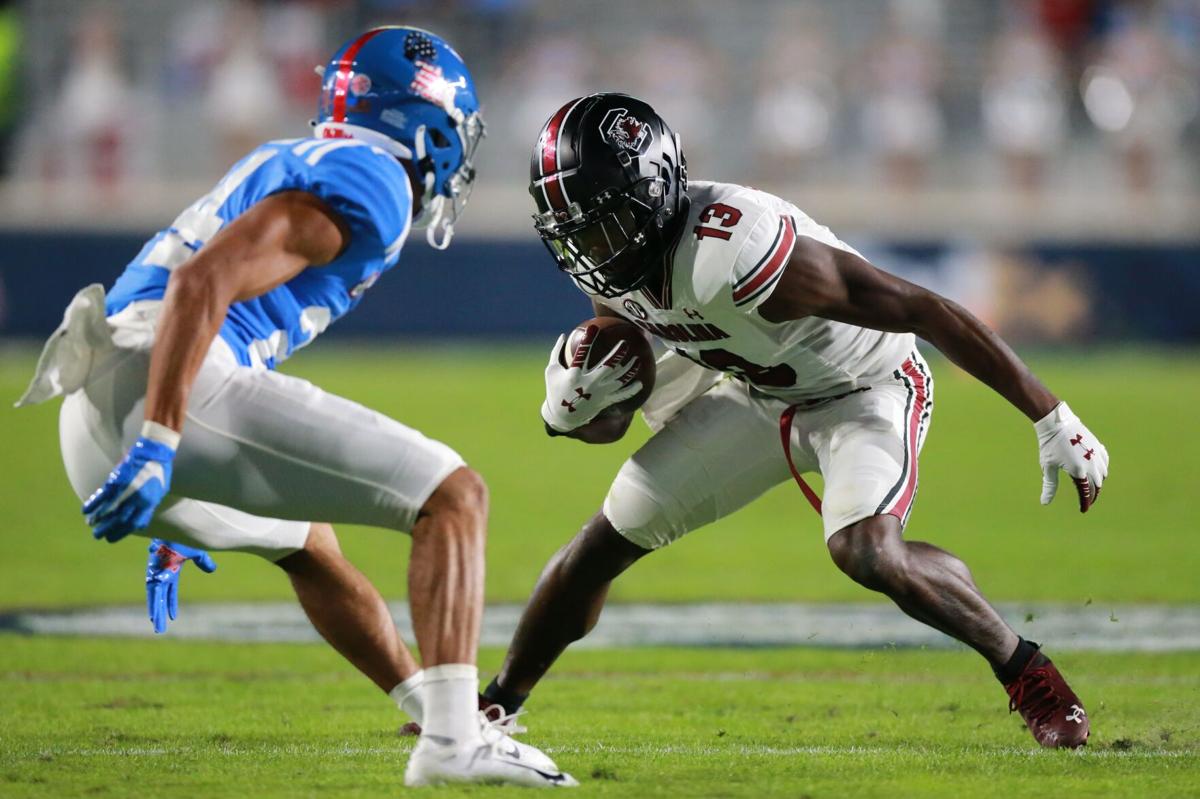 Shi Smith lead the Gamecock with 82 yards receiving in the first half Saturday night.

Shi Smith lead the Gamecock with 82 yards receiving in the first half Saturday night.

The Rebels broke a three game losing streak against the Gamecocks and are 3-4 this season. The Gamecocks have lost their last three games and have allowed a total of 159 points in those losses.

This game was a wild offensive shootout from the start. Ole Miss kicked a field goal on the last play of the half for a 24-21 lead, then took the second half kickoff down the field for a 75 yard scoring drive and a 31-21 advantage.

“I thought our guys played extremely hard,” said Gamecock coach Will Muschamp. “Our guys competed hard in the game. We wanted to run the ball and we ran for over 300 yards. We just couldn’t get any stops defensively.”

The team’s exchanged touchdowns leaving the Gamecocks up 42-38 with 12:50 left in the game. But the Rebels reeled off three straight touchdowns, including a 91 yard scoring pass, while the Gamecocks’ final three possessions ended with a punt and twice on downs.

Ole Miss quarterback Matt Corral set a school record with 513 passing yards. He completed 28-32 passes and had 4 touchdown passes. He found his top receiver, Elijah Moore, 13 times for 225 yards and 2 scores, including the 91 yard pass that put the Rebels back in front for good.

Ole Miss, operating its up tempo offense to near perfection, ran 80 plays and totaled 708 yards and averaged 8.8 yards per play. The Gamecock defense put very little pressure on Corral. He was only sacked once and he was hit just one other time. With plenty of time to throw, Corral picked apart the Gamecock secondary, which knocked down just one pass.

“They didn’t come out with anything different from what they have run,” said USC linebacker Ernest Jones who totaled 18 tackles. “We felt like we were prepared. We just didn’t get the job done.”

The Gamecocks had a season high 548 yards and averaged 8.1 yards per play. Harris was the big weapon, but quarterback Collin Hill had a solid night with 230 passing yards and a touchdown to Shi Smith. Smith caught 10 passes for 117 yards.

The Gamecocks return home next Saturday night to host Missouri.