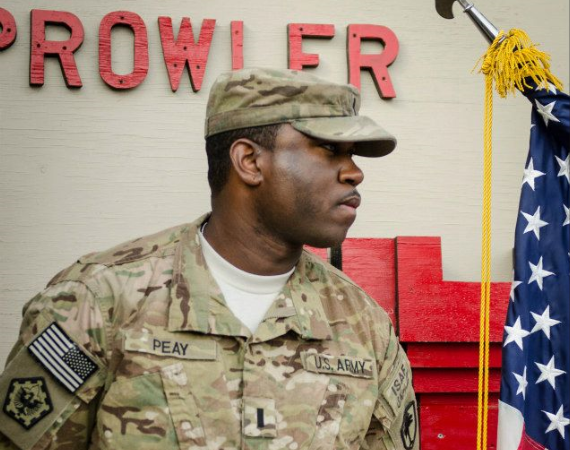 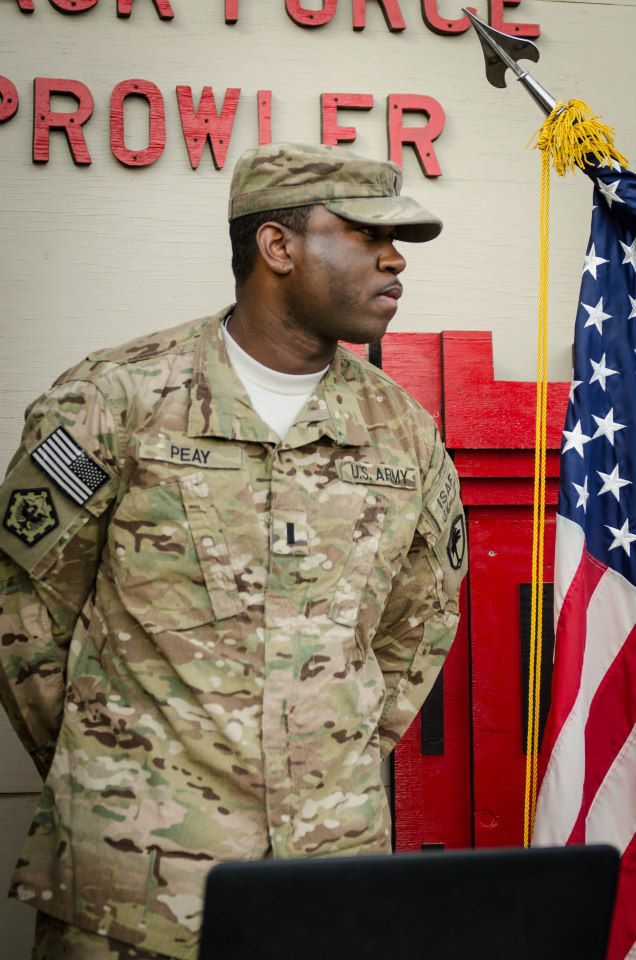 When I first met First Lieutenant (1LT) Ja’Pa’ Peay, he was a brand new Private First Class and was assigned to me as part of a detail to work the FLW fishing championship in 2008. I knew he was a special soldier and that he was going to have an amazing career in the US Army.

Many soldiers wearing the uniform joined for the educational benefits. When asked if that was his reason for joining, Peay said, “Well actually that’s a yes and a no and this is why: after graduation Lancaster High School back in 2004, I was not planning on going to college at all. I figured I would take a year off, try to figure out life and I’d do some growing, but I had a couple ladies at USCL that believed in me and really wanted me to go to college.”

Those ladies took care of making sure Peay enrolled and handled all the paper work – in fact all Peay had to do was write the essay. “At this point in time I was not thinking about joining the military,” he said. But he thought if he was going to join it would probably be the Air Force, according to Peay. “Those guys have it easy, I want to go that way,” he joked.

A good recruiter is hard to shut down though, and soon Peay was back in his office. “He told me, ‘I tell you what, I’m not going to sell you anything, I’m not going to pitch you anything. I want you to do one thing for me, go do some research, see who’s giving you the best benefits at the time, and then you come back, see me if you want to get in,’” said Peay. He went home, and looked into it. Peay said two weeks later he called the recruiter and said, “put me in coach.”

Peay commissioned in 2010 and soon after was headed for his first deployment. “I got back from my basic officer course and we got word that we were going to deploy in two years. So I’m thinking in my head, deployments fall off all the time, that’s two years, it’s never going to happen.” However, the Army marches on as the old cadence goes, and soon it was 2012.

“We were at the SRP for our mobilization and were doing all our readiness checks,” Peay said. “That’s when I had a moment, or realization, I’m like hey! I’m going to Afghanistan!”

Like many of the soldiers who have been on the Soldier Salute, Peay has had an experience that causes him some Post Traumatic Stress Disorder. “In my case, I’ll have to go back to a movie,” he said. “Have you ever heard of The Purge?” If you’ve been listening to the Soldier Salute you know I love a pop culture reference.

“It’s one thing in The Purge movie that set me off and this is why: When I was in Afghanistan we used to always get indirect fire. I was there about a month in, the alarms go off twice a day, every day, sometimes within five minutes of each other and there was this one time I was like you know what, maybe I should actually do my battle drills and get to cover. I got off my Gator and a rocket landed literally within 25 meters of me,” he said. I could imagine an experience like that would leave anyone rattled. Peay said before the rocket came, they had a siren that went off that sounded exactly like the siren in the movie.

We also discuss Peay’s experience at the Palmetto Military Academy (PMA), his vast travel across the country via “Tour of Duty,” and what he is facing as his next challenge. Be sure to join us this week on the Soldier Salute to hear the complete story.