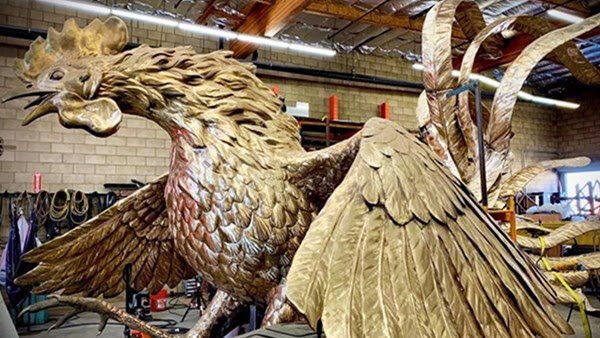 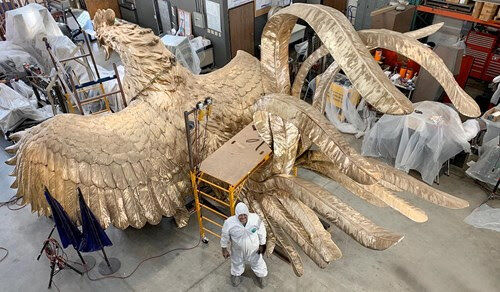 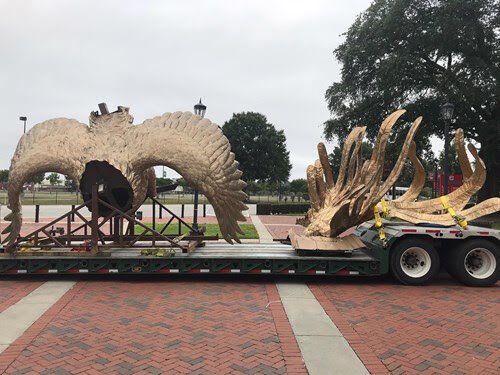 The Springs Brooks Plaza outside the University of South Carolina’s Williams-Brice Stadium will have a new centerpiece with the delivery of the much-anticipated Gamecock sculpture Thursday. The $1 million sculpture was privately funded, and no funds from the Athletics Department were used for the project. The project was made possible through generous alumni donors, David and Lynette Seaton (’84), Bill Horton (’73) and his wife, Mary Major (’75).

"We have close ties to the University," said Horton, who is a retired executive from Blue Cross/Blue Shield and lives on Isle of Palms. "We're both graduates from there. We have a long history of being linked to the University. We thought it would be a wonderful capstone to all the work that has been done around the stadium with the Springs Brooks Plaza, Gamecock Park, the new practice facility and of course the new renovations to the stadium. We really thought this would top things off."

South Carolina Athletics Director Ray Tanner said he is grateful to the two couples for their generous donation. "We have all been patiently waiting for it to arrive here. Its large size and intricate details make this statue unique. It will be worth the wait to have this magnificent statue in front of Williams-Brice Stadium,” he said.

The Gamecock sculpture will be placed near the corner of Bluff Road and George Rogers Boulevard. Work will begin Thursday and take nearly two weeks to complete assembly and final surface finishing. Standing approximately 20 ft. tall and 20 ft. wide, it is expected to be ready for unveiling prior to kickoff of the 2020 season Sept. 26.

"When the plaza was designed, there was a location designated to receive a monumental structure, and that's the best way to describe this work. It is monumental," said University Architect Derek Gruner, who was the chairperson of the committee that selected sculptor Jon Hair for the project. "We intentionally wanted an iconic sculpture that would not be dwarfed by the stadium." Hair has created numerous mascots at colleges throughout the country that are typically very large, according to Gruner. "He had the credibility and expertise to execute something of this magnitude," he said.

The 10-ton Gamecock will take about two weeks to finish, put together, and put it in place, after traveling on a flat-bed truck from San Diego.

"We had to install some structural components to tie the concrete base down about 20 to 25 feet into the soil to help resist any wind uplift forces," Derrick said. "These are installed down into the planter and tied into the concrete on which the lower armature currently sits. The armature is the structural base which the bird will be attached to - ultimately, it will be covered in granite."

The steel frame is bolted into place and then the torso, tail, and head pieces of the sculpture get lifted, attached to the frame, welded together with joints ground smooth, and finished with a patina coating.

Assembly begins on-site Thursday with welding and grinding to take place for the next week. If all goes according to plan, sandblasting of the sculpture is scheduled for Friday, September 18, and four days of patination will follow. Much of the work will be done inside a large tent to create a controlled environment.

Despite the long process, the final product will be worth the wait, according to athletics officials. Horton said he plans to be there for the first game.

“For decades to come, people are going to want to come and get their picture made in front of the Gamecock. Just knowing that people love our school and support our athletics program, that’s exciting to me,” said Seaton.

Were the donors generous or extravagant? If they had $1M lying around, it seems they could have done something more useful to the USC community than this.