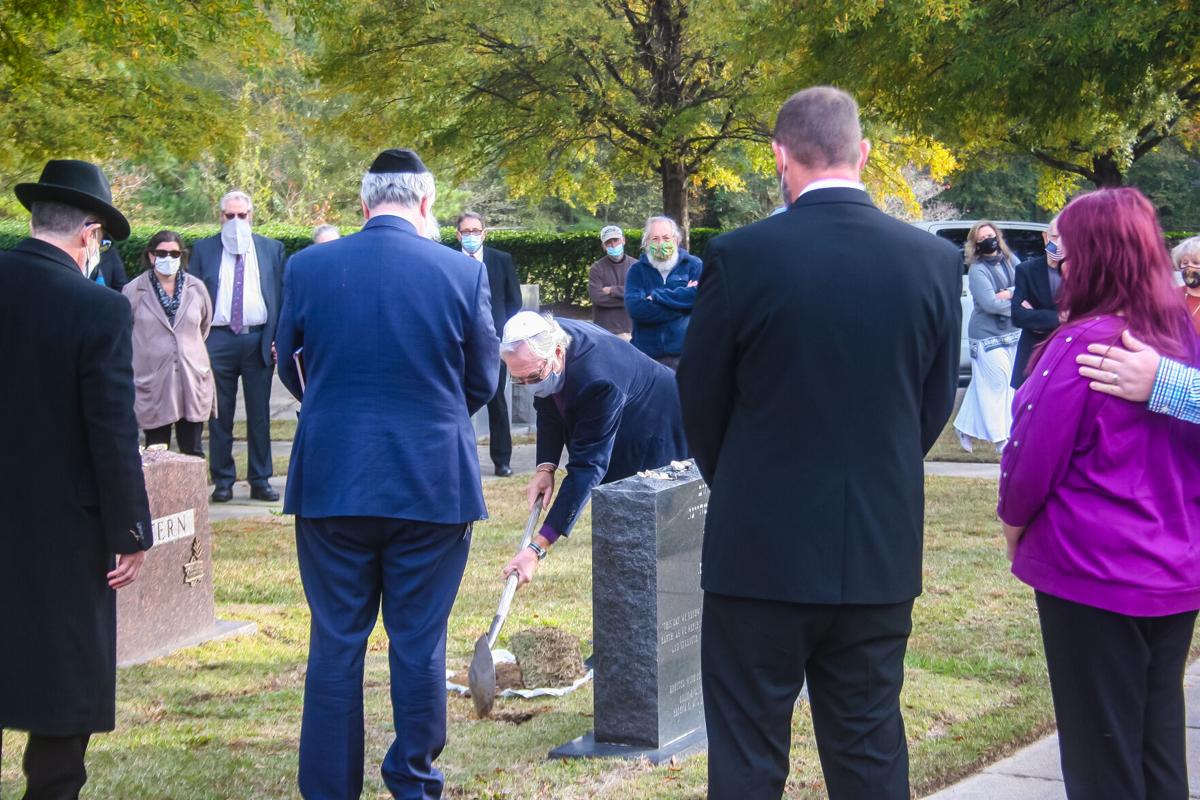 The remains from Dachau in their box atop the memorial stone. 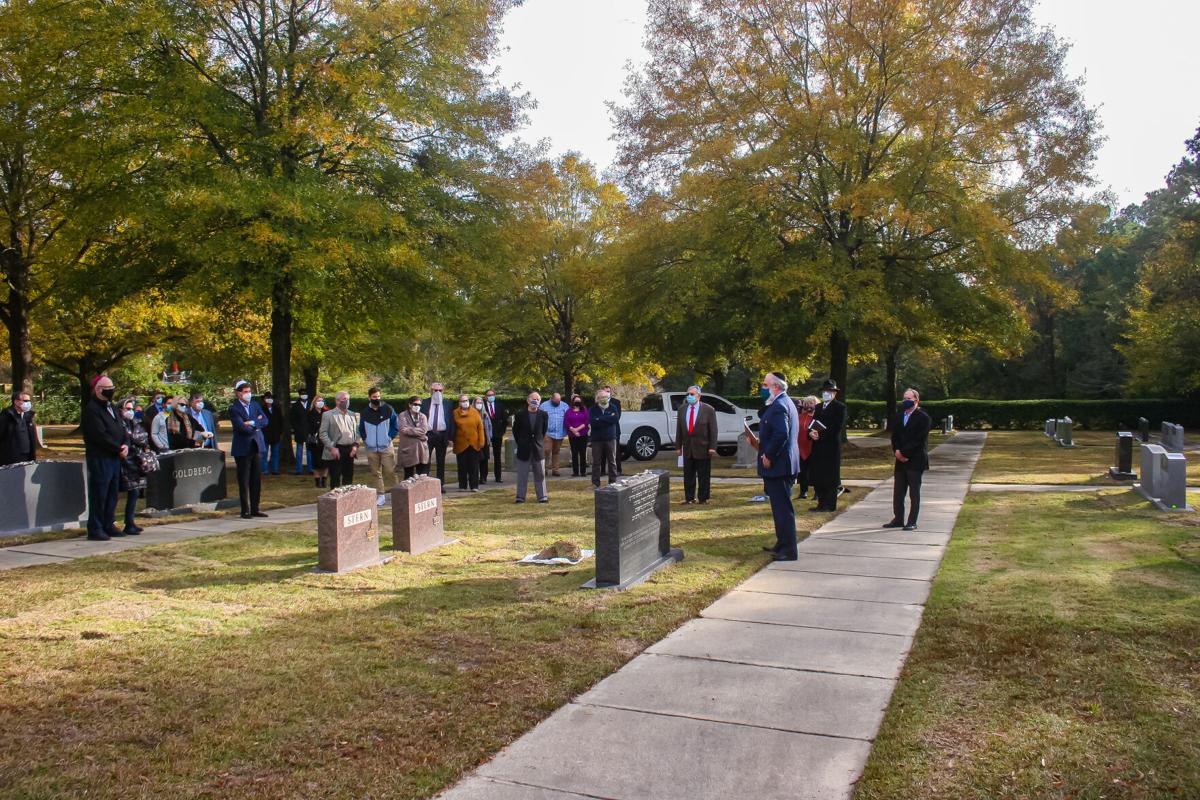 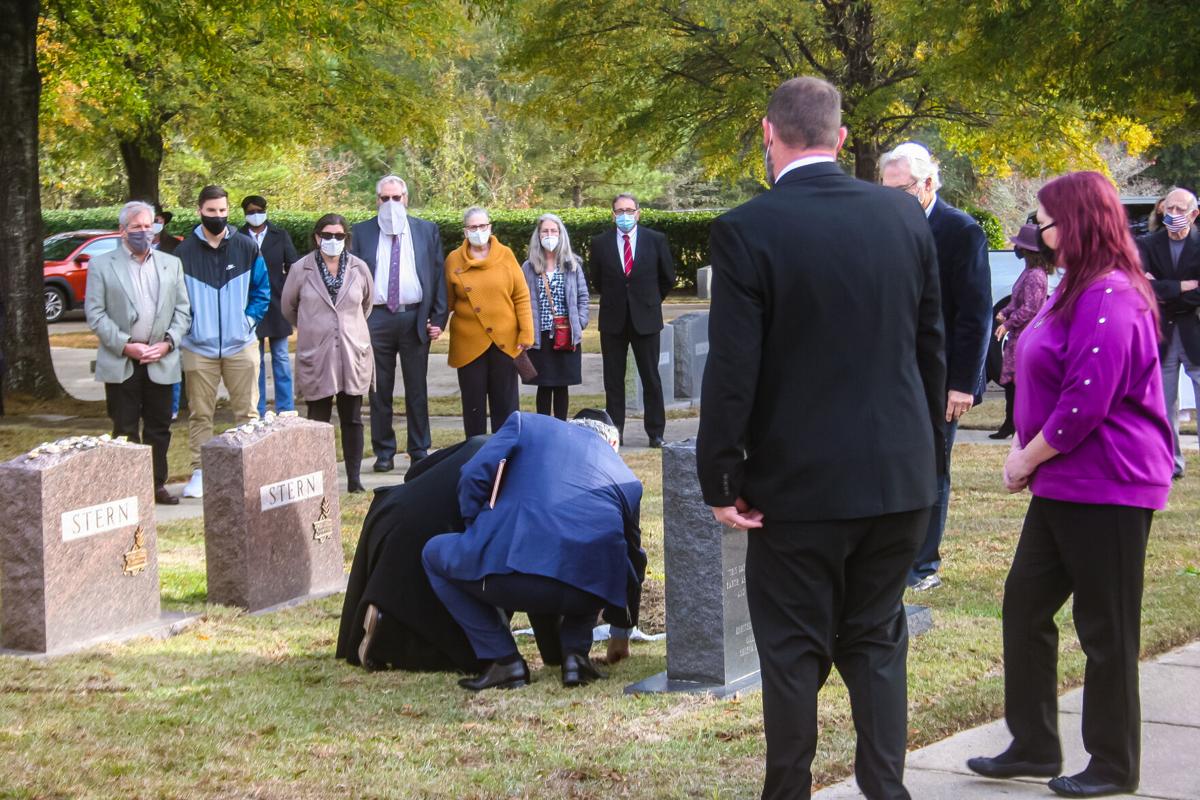 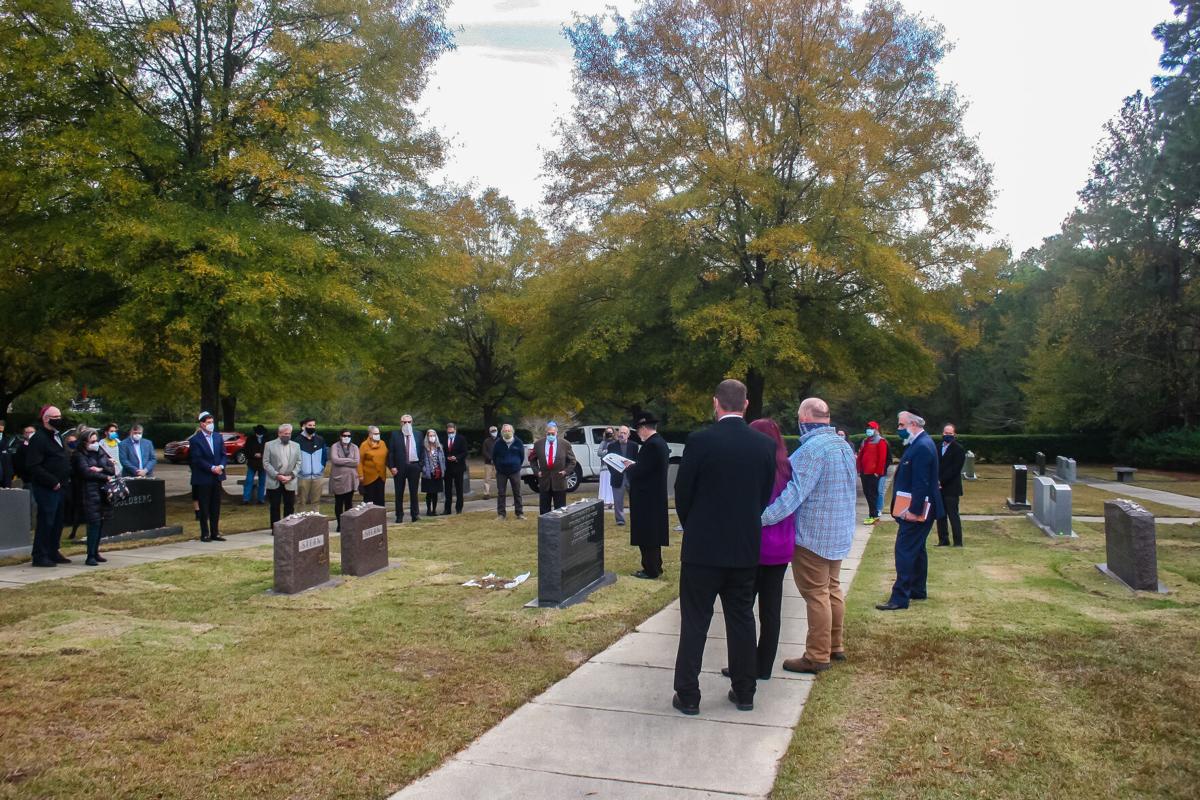 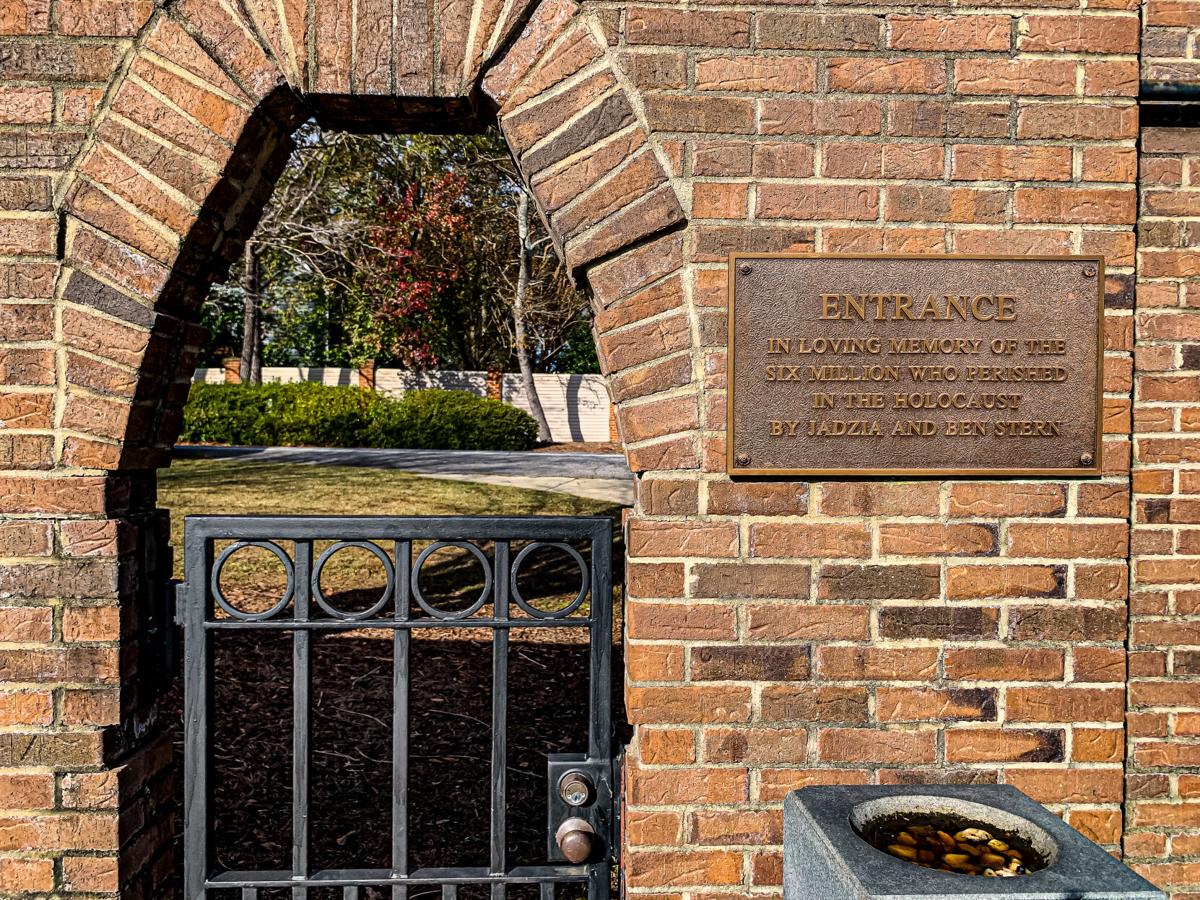 The entrance to Columbia's Jewish cemetery 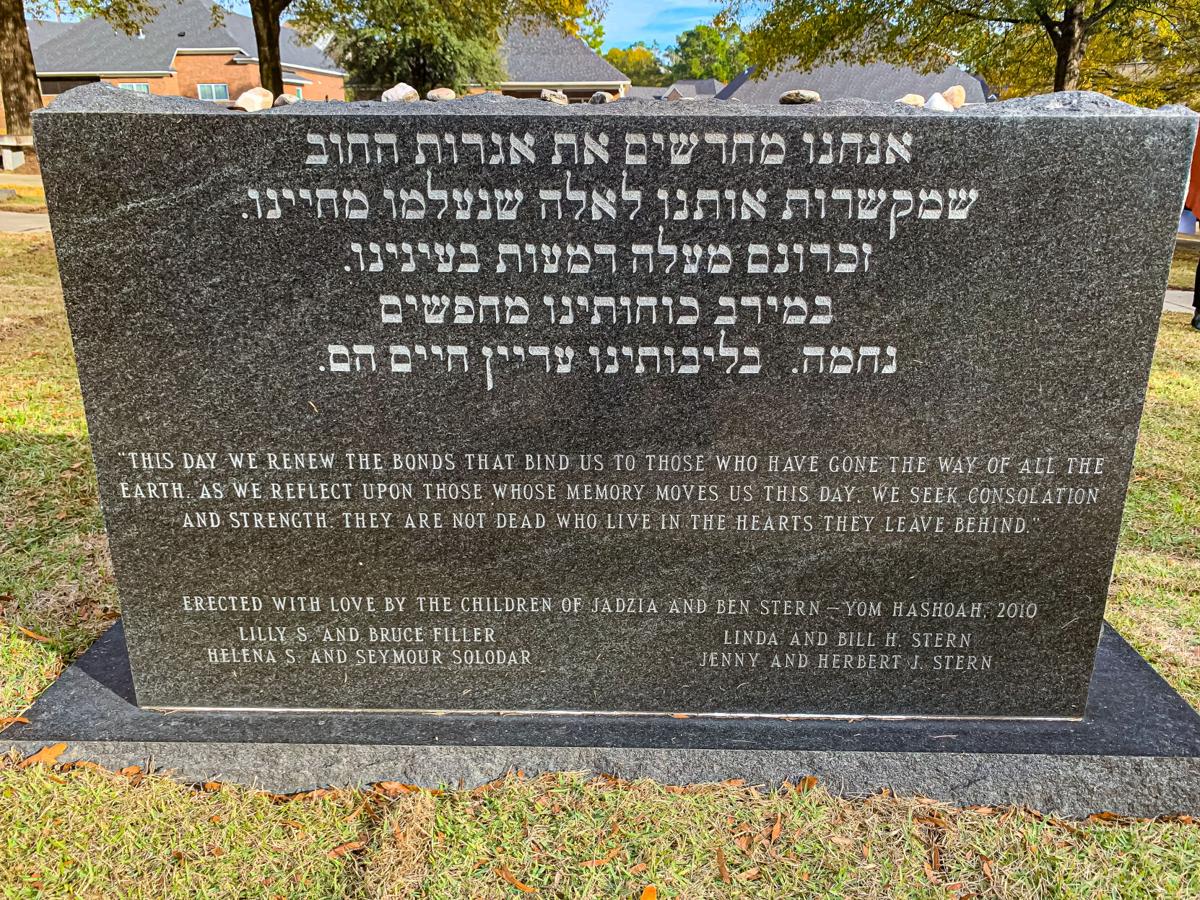 The memorial stone (back) 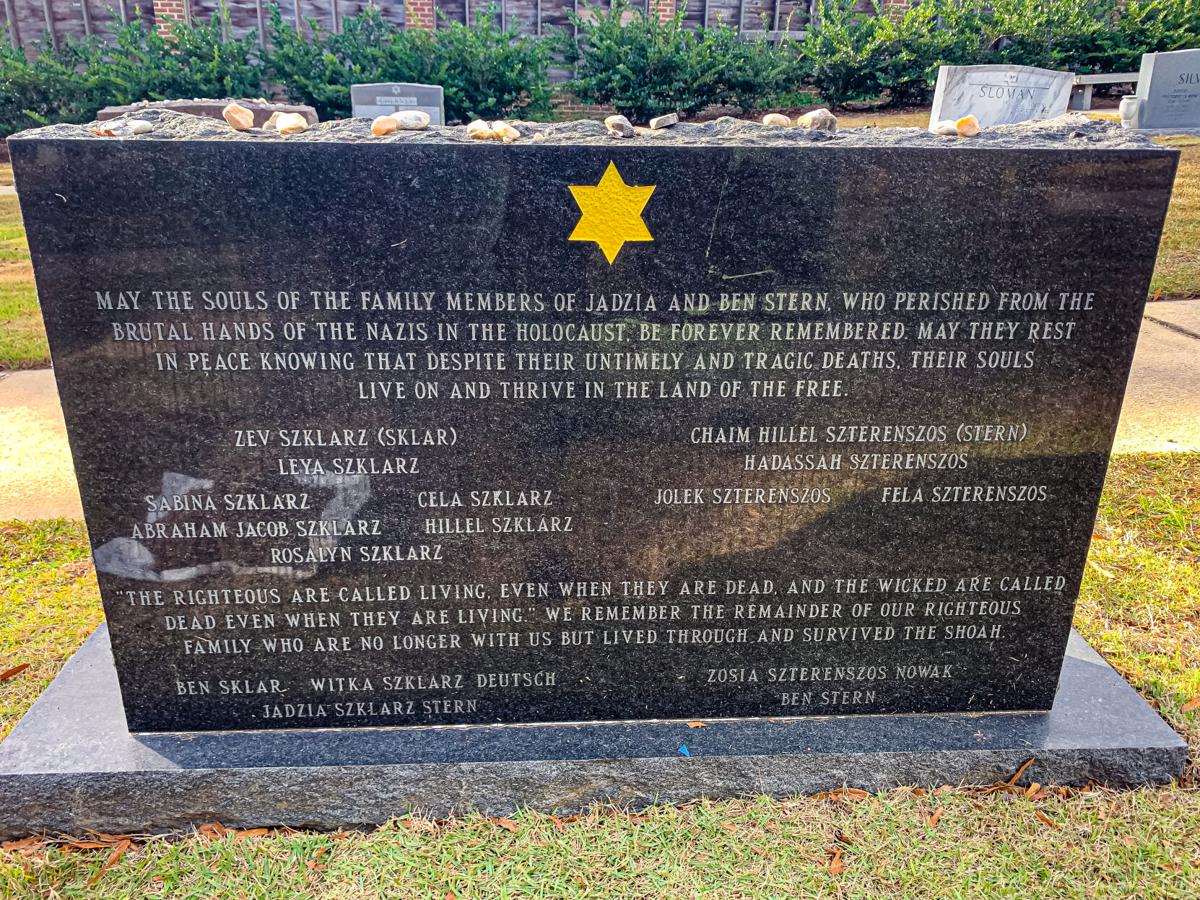 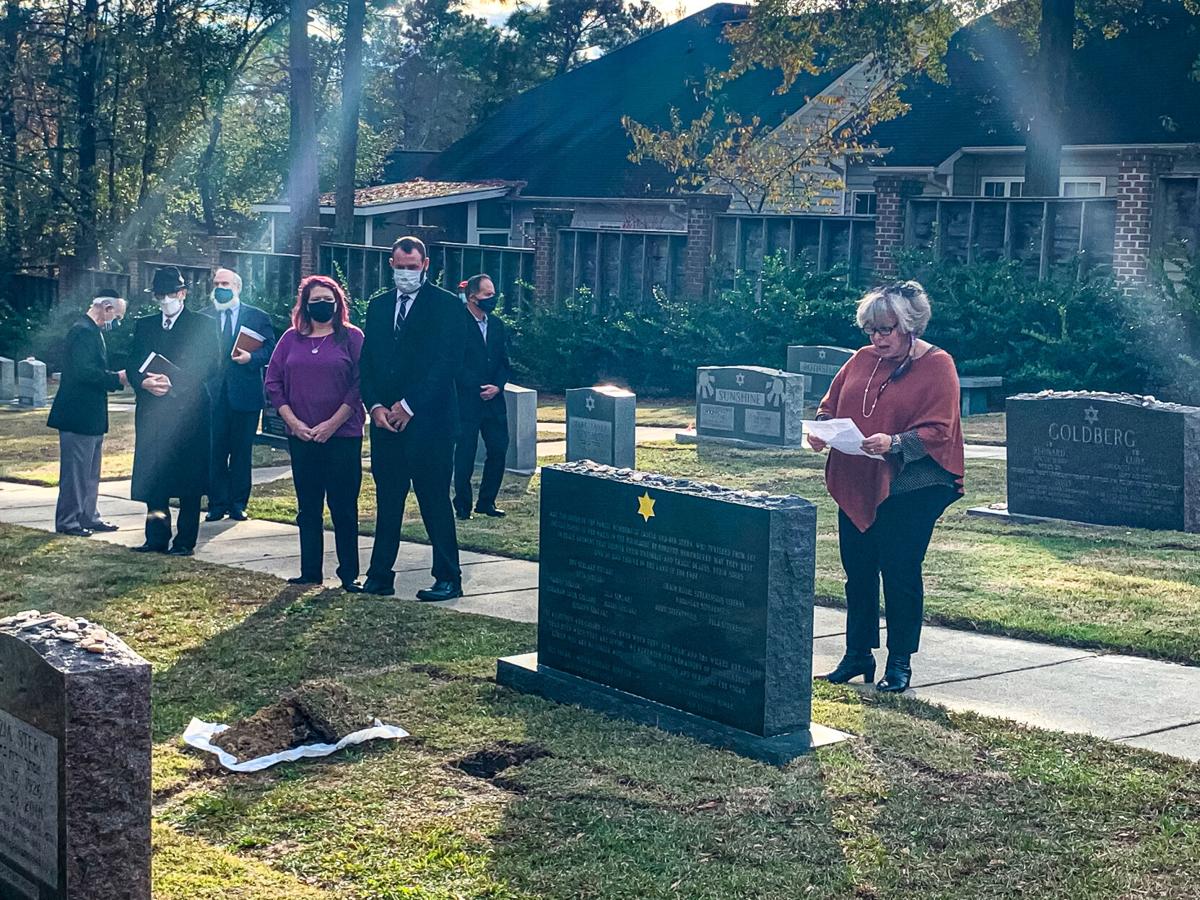 Lilly Filler (right), the Bouknights and the rabbis

The remains from Dachau in their box atop the memorial stone.

The entrance to Columbia's Jewish cemetery

The memorial stone (back)

Lilly Filler (right), the Bouknights and the rabbis

Sunday afternoon at Columbia’s Jewish cemetery, dozens of people gathered to mourn. Not one of them knew the names of the dead they buried, nor even how many there were, but all mourned just the same. They knew those lost were murdered by tyrants simply for being Jews, and they gathered 75 years later to finally lay them to rest in peace.

The extraordinary memorial came about through the kindness of a man who is not a Jew. Daniel Bouknight’s grandfather, John Bouknight, a U.S. Army veteran who served in Europe in the aftermath of World War II, died earlier this year. When Daniel Bouknight was organizing his grandfather's possessions, he found a small cardboard box. Written on it was “These ashes was taken from the crematory at Dachau, Germany on 11 Feb.1945. Prisoners were burned in the oven that these ashes were taken from, small portions of bones remains.”

John Bouknight had never spoken of the box to anyone. Daniel Bouknight still has no idea how it came to his grandfather. A less caring person might have thrown it away. Daniel Bouknight knew he had to do the right thing. He called Rabbi Hesh Epstein of Chabad of South Carolina to ask for advice, and the rabbi soon came to the Bouknights’ Chapin home to claim the remains. After consulting with other rabbis, Epstein called Lilly Filler.

Filler lost both sets of grandparents and numerous aunts, uncles and cousins in the Holocaust. Her father was a prisoner at Dachau when the Allies liberated him in 1945. In 2010, she and her family commissioned a monument at Columbia’s Jewish cemetery in honor of their relatives who died. The stone bears, among other things, a yellow star, like the ones the Nazis forced Jews to wear as identification.

After hearing the story from the rabbis, Filler and her family welcomed the idea of the ashes of the unknown victim or victims of Dachau being buried at the stone.

"It will directly link these ashes from Dachau to Chapin to Columbia," Filler said. "This is a stone about the Holocaust and those lost."

Many of those who gathered Sunday, including Rabbi Epstein, had relatives who disappeared during the Holocaust and are presumed to have been killed, but their exact fates remain unknown. The connection to the ashes interred in sacred ground in Columbia is to them not just historical, but also personal.

"We don't know who you were, where you called home, what your mother called you when you were in trouble, who loved you or who you loved, but we know you were murdered because you were a Jew. Your very existence stands for the inextinguishable voice of hope in human conversation. Because your ancestors refused to bow to tyrants, to worship false gods, and to never stop dreaming of a better world under God's rule, your death was not in vain. You died in darkness, perhaps thinking you were witnessing the end of your people. You were not. We are your children. We share your dreams and we pass them to the next generation,” Epstein said. "We have gathered here today to honor your memory along with the 6 million of your brothers and sisters…You are home."

The memorial established by Lilly Filler and her family to honor their relatives had become, even before Sunday, a symbol of all 6 million murdered in the Holocaust. Atop the stone are many small rocks, perhaps an odd sight to those unfamiliar with Jewish tradition.

"We don't bring flowers. We bring stones,” Filler explained, adding that the tradition dates back to the days of the Jewish nation wandering in the wilderness, where flowers would be blown away or taken by animals. "Putting a stone down is a more permanent reminder."

75 years ago, a person or people were murdered at Dachau, slaughtered for no reason other than a powerful enemy’s racial hatred. They died, as Rabbi Epstein said, in darkness. But Sunday afternoon, in sunshine, in a world where Israel stands strong and free and in a country where Jews worship as they please, their remains found a final resting place at last. They lie under rocks placed to remember them, and under a memorial stone with this inscription: “May they rest in peace knowing that despite their untimely and tragic deaths, their souls live on and thrive in the land of the free.”